On Monday Stephen Harper announced that he will ask the Governor General to prorogue parliament.  This means the House and the Senate will remain suspended instead of resuming in September as expected.  Although Stephen Harper has used this technique in the past to avoid things like confidence votes this time it is seemingly less devious as he has just shuffled his cabinet.  The idea is that he is trying to give his new cabinet ministers time to get to know their new roles.  Some will argue that he is simply proroguing to avoid questions about the Senate finance scandal. In the past, Harper has made a point of avoiding questions both in the media and in the House whenever something tough is asked of him.  He will simply shrug Senate spending questions off, avoid them, or answer with some sarcastic comment.  What we want to look at in this post are any other incentives Harper might have for proroguing that Canadian parliament.

First, and most obviously, parliament is suspended.  There has been no set date for them to return.  The Conservative party convention is sometime around Halloween so it is possible that we will not see parliament back in session until November.

The second effect is more important.  All bills before the house that have not received Royal assent will “cease to exist”.  According to the government there are currently 447 bills before the House, the Senate or in committee. All of those will be cancelled. Below you will find a breakdown of all the open bills by political party. 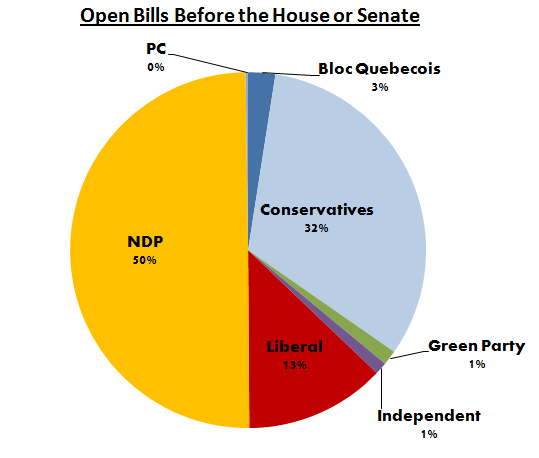 So these bills will all die in their current state.  But we see that,

“In order for government bills to be proceeded with in a new session, they must be reintroduced as new bills or they may be reinstated, if the House agrees to this.”

Here is the main problem. Does the House need to agree on each of the bills individually or is it an all or nothing deal? The “detailed” version of the Parliamentary Cycle website regarding prorogation is not clear. Since it is the government, I will assume the worst.

So if the House, where the Conservatives have the majority, agrees to let those 223 NDP bills be reinstated then there will not be much effort lost by starting a new parliamentary session.  I suspect however that the NDP will be forced to reintroduce every single one of them.

To be fair, only 72 of those 447 bills have made it to first reading. The rest are still waiting for that privilege, I assume.  The government website is not entirely clear on why the numbers are so different.

On the other hand, the 144 bills that have been introduced by Conservative members will face the same House decision and will likely be reinstated.  This seems like a very easy way to get a majority government’s bills bumped to the front of the line.