After filling out my 2016 census online I remembered how much traffic an old post had gotten during the 2011 census.  All of the traffic came from a similar set of search terms. Some examples from this year: 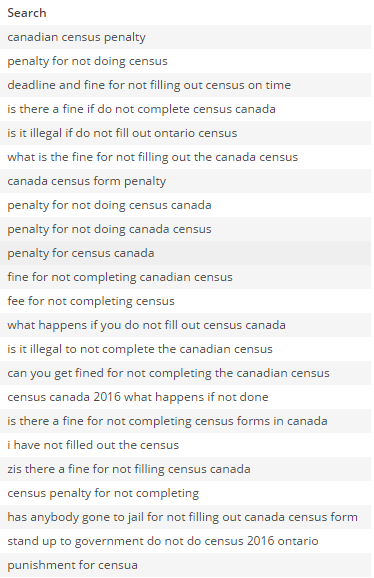 So you can see there is a theme.  I had to update my original post talking about the penalty for not filling out the forms because the government changed the link.  Also, they make the penalty rather hard to find so I thought it would be a good public service.  Feel free to read through the comment section there to really get a good idea as to the mindset of the people reading and posting comments.   For the record the penalty (that has never been applied) for not filling out the 2016 census reads like this:

“guilty of an offence and liable on summary conviction to a fine not exceeding five hundred dollars or to imprisonment for a term not exceeding three months or to both.”

There are many things that a government does that are questionable.  If they were spying on your location and listening to your phone calls all the time then there are major concerns.  This is not the same thing.  This is trying to use your infrastructure dollars more efficiently.  Roads, sewers, doctors, fire services, etc. are all influenced by the census data.  The government is already inefficient enough, there is no need to hinder this part of their work.

If it makes the doubters feel better, this data is extremely hard to get a look at.  There is a question on the census that allows easier access to historians 92 years from now for a reason. This is not just some database that you can google and grab personal data out of.  Even researchers have to submit an application that contains a literature review and research goal to StatsCan just to get access to the single terminal that might exist on a university campus.  There are rules about what you are allowed to have with you when you look at the data and what you can take away with you.  On top of that the data is all reworked as to be completely anonymous. If there are too few people in some subset of data then it is coded.  For example, if they were using income brackets that were $20,000 – $40,000  and $40,000 – $60,000 and kept going up like that they wouldn’t use something like $10,000,000 – $10,020,000 because that subset would have too few people in it and you might be able to combine the information and then figure out who the person was (Then you would know if they spoke French or not!). StatsCan would just set some cutoff and top code it by saying $500,000+ to ensure there was enough people in the subset to make it impossible to identify any individual.

Short post today because I am just getting back into it after the website hack which was supremely aggravating.

If you have not already, go do your census.